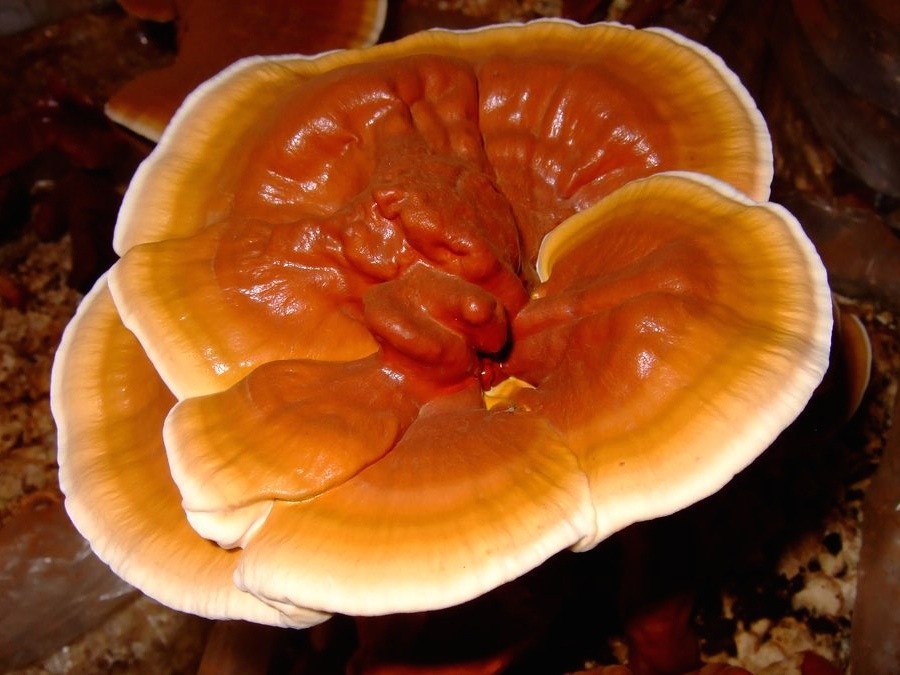 Today’s post is about Reishi Mushroom (pronounced ray-as in stingray, shi-as in she), one of the most powerful,

Today’s post is about Reishi Mushroom (pronounced ray-as in stingray, shi-as in she), one of the most powerful, widely used tonic herbs and medicinal mushrooms in Asia. I wanted to start with this herb because of its wide range of health benefits. Known to the ancients as the “mushroom of immortality,” it promotes health and longevity, boosts the immune system, combats cardiovascular issues, and has been used to treat cancer and side effects from cancer treatment. It also supports all Three Treasures (Qi, Jing, and Shen – the Mind or Spirit), which I discussed in detail last week (read about Qi and Jing). As a Jing tonic, it strengthens our mind and mental health as well. Because Reishi is such a balanced herb, almost anyone can use it safely!

Reishi is best known for its immune boosting qualities. It improves our immune function whether our system is in a “deficient” or “excess” state. Deficient and excess are Chinese medical terms to describe the state of a disease.  An overactive immune system is considered an “excess” condition such as autoimmune diseases (e.g. Lupus, Rheumatoid Arthritis, Multiple Sclerosis, Grave’s disease, Hashimoto’s thyroiditis) or allergies. The immune system is on overdrive so much that it attacks itself.  A “deficient” immune system is what we traditionally see with someone who gets frequent colds and infections or more severe infections such as HIV, hepatitis, or cancer. The immune system is not strong enough to fight the bacteria, virus, or cancer cells.

Reishi is an immune modulator as it not only stimulates our immune system to fight infection (i.e. in a deficient state), but it also regulates it when necessary (i.e. in an excess state). Reishi is the only known source of ganoderic acid, which acts like a natural steroid. Japanese research has found that Reishi extract can inhibit histamine release from most cells. It is potentially helpful in treating Type I allergies such as anaphylactic shock, dermatitis, hay fever, hives, drug allergies, and asthma. The extract was also shown to enhance steroid drug effects. That is, consuming Reishi along with steroid medication will decrease the steroid dosage needed as well as the side effects from steroids.

Reishi has been used in Asia to improve the cardiovascular system. It treats cholesterol by lowering LDL and excess fatty acids. Studies have shown that it can prevent hardening of arteries and treat symptoms of chest pain and shortness of breath associated with heart disease. In a study with 92 patients with myocardial infarction and chest pain treated with Ganoderma, it was found that 72% felt symptom relief.

Reishi has been used in Japan as anti-cancer therapy and in conjunction with chemotherapy and radiation. It reduces the side effects of chemo and radiation but also aids in rebuilding the immune system. It was found that Ganoderma stimulates interferon and interleukin 1 and 2, crucial immune mediating cells in our bodies. Studies in Japan and China have found that Ganoderma also reverses leukopenia, or white blood cell death, which is why it is used with chemotherapy to protect white blood cells.

Reishi is also an adaptogen, which strengthens our adrenals helping us to manage and adapt to stress. It was also considered to be the premiere shen tonic of Chinese herbalism. It has been called the “mushroom of spiritual potency” and was used in ancient times to calm the mind, improve memory, sharpen concentration and focus, increase willpower, and build wisdom. It can treat different emotions such as anger, frustration, depression, grief, and sadness by changing the way we perceive things and helping us process and release those emotions.

The Science Behind It

The primary constituent responsible for the medicinal actions of Reishi mushroom is called triterpenes. Ganoderic acid is a triterpene produced by Reishi and more than a hundred different triterpene molecules have been isolated in Reishi. Studies have found that ganoderic acid suppresses growth and invasive behavior of breast cancer cells (here and here). There has also been evidence that it may be beneficial in treating advanced prostate cancer as well as leukemia and lymphoma. Out of the mycelium, stem, spores and caps of the fruiting body, the caps provide the richest source of triterpene acids. Wild Reishi also contains organic germanium, which is thought to have strong immune boosting and anti-cancer properties in Japan, although studies in the states have been inconclusive.

Immunostimulant polysaccharides have also been isolated from Reishi. These polysaccharides are thought to activate macrophages and T lymphocytes (white blood cells), enhancing the cell-mediated immune response.

What should I look for in my Reishi supplement or extract?

Analysis of three strains of Reishi, (red, purple, and black), have found that red and purple strains have similar triterpenoid patterns, while black Reishi had little triterpenoid material. The Reishi extract should come from the red or purple caps or fruiting bodies of the mushroom, which contain the highest concentration of triterpenes and polysaccharides.

The mycelium of Reishi, which is the fungus without the fruiting body that grows on wood, was not traditionally used as a tonic herb by the Chinese and Japanese. It is also not a shen tonic like the actual mushroom. While the mycelium has been discovered to be rich in the same polysaccharides, it does not contain triterpenes and is regarded as an inferior product.

The extract, whether in powder or liquid form, should be bitter from the triterpenes. If it isn’t bitter, the triterpene concentration is not high enough!

Reishi Spores, which are the seed of the mushroom are believed to contain an abundance of Jing and also considered an antiaging substance. The spores must be purified and go through a process called “cracking,”  where special enzymes are utilized to break down the cell wall of the spores making their nutrients bioavailable. Reishi spores are much more expensive than Reishi mushroom extract, but a good value.

The sources I recommend to get your Reishi product is either through Dragon Herbs or Real Mushrooms (dragonherbs.com or realmushrooms.com) Dragon Herbs have Reishi in drops, capsule, or spore form while Real Mushrooms sell a concentrated powder extract that can be mixed with coffee or tea.

Have you ever tried Reishi before?

In health and wellness,
Dr Elain